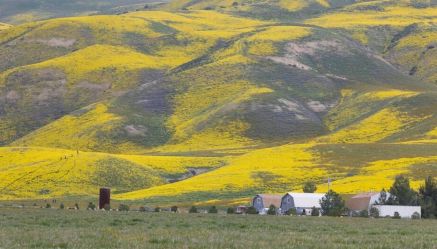 The Carrizo Plain Conservancy announces that it has donated a 42-acre parcel of private land with a quarter-mile of shoreline on Soda Lake to the United States of America for inclusion in the Carrizo Plain National Monument.

While Interior Department officials in Washington, D. C., consider shrinking or doing away with national monuments in California, the citizens of California and the Central Coast continue to support the Carrizo Plain National Monument with their pocketbooks and volunteer efforts.

The recent addition was purchased in 2015 entirely with private funds donated by many citizens and a grant from the Oakland-based California Wildlife Foundation. The property had been the victim of illegal dumping over the years and so it was cleaned up with removal of over 11 tons of trash, also paid for with private donations.

The Carrizo Plain Conservancy has also offered to donate 13 additional parcels of land within current monument boundaries to the United States. These properties were recently purchased again entirely with private funds.